Cornwall-based artist and wilderness painter Tony Foster is raising thousands of pounds for Cornwall Wildlife Trust’s vital work through sales of his “Lockdown Diary – 56 Days” print, which contains watercolours and written observations for every day of the lockdown earlier this year.

Here he talks to Cornwall Wildlife Trust about his art, love of the outdoors, and experience of lockdown.

How did you become an artist?

It was the one thing at school I was good at. I left school at 16 and worked in various jobs for almost 20 years. It took a while to dawn on me that I could earn a living from art. By my mid-30s, my wife and I had managed to save enough money for me to take a break for two years to concentrate entirely on art to see if I could make it work. Although I didn’t become an overnight success, there were enough encouraging signs and it progressed from there. I’ve been lucky enough to be able to focus on it for the last 40 years, which has been a fantastic privilege.

How would you describe your art?

I’ve spent much of my career in some of the world’s great wildernesses - rainforests, deserts, the Arctic, and mountain ranges including the Himalayas. With my art, I try to convey what’s it’s like to live in these wild places for a while. I also incorporate into the work written diaries about the events of my time in a place and symbolic souvenirs. So the work isn’t simply landscape painting – it’s about being absorbed in wild places.

I usually work to a theme, like ‘volcanoes’, ‘rainforests’, ‘mountains’ or ‘water’. A series may take three or four years to complete, at which point I have an exhibition, which generally opens at a museum in Britain before showings in the USA. I’ve worked a lot in America, which has some of the world’s best-preserved wildernesses, so I’ve exhibited over there many times. One of my American collectors set up The Foster Art and Wilderness Foundation in California (basically a permanent museum for my work), so I am probably better known there than in the UK.

How did you find the first national lockdown of the COVID pandemic?

Like everyone else, I thought “what am I going to do with this time?”. I always go for a walk every day when I’m at home but on the first day of lockdown I did a sketch and took some notes, coming back and thinking “that’s quite nice”. I started paying much more attention to what was around and found it very satisfying. I then realised I could explore my own backyard, and in this way record my response to lockdown.

Were there any particularly memorable days / drawings?

The day the swifts came back to nest in our roof. Every year they arrive within three days of 8th May, and it is always a joy. I also remember watching a large bumblebee struggling up a sand dune to find shelter from an icy wind. I found studying the little things fascinating and uplifting in what was a difficult time.

One of the 56 drawings I find particularly poignant is of pink cherry blossom at Tywardtreath Churchyard. One of my closest friends, who I played snooker with for 40 years, passed away from COVID. We weren’t able to attend the funeral but, like many in the village, stood on our doorstep to watch the hearse pass, wearing something pink as requested by his family. It was shortly after I drew the cherry blossom to honour our long-lasting friendship.

Like everyone else, I thought “what am I going to do with this time?” 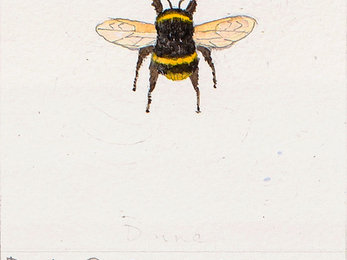 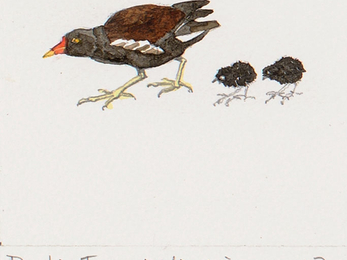 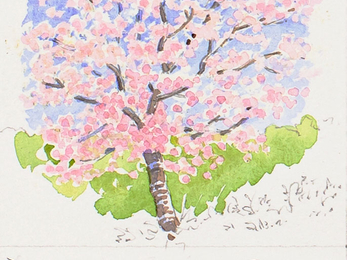 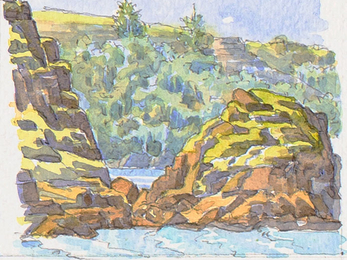 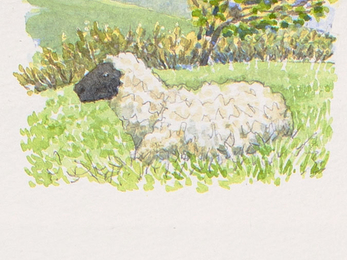 The wildlife is an integral part of preserving the character of Cornwall, but it’s under such pressure.

What does Cornwall and its wildlife mean to you?

My wife and I have lived here for almost 50 years and we find Cornwall one of the most beautiful places on earth. The wildlife is an integral part of preserving the character of Cornwall, but it’s under such pressure. That’s why I’m supporting Cornwall Wildlife Trust through my art. We have been members for over 40 years and the lockdown diary couldn’t be more Cornish, so it feels right that a share of the sales should protect nature on our doorstep (the rest being split between World Wildlife Fund and Rainforest Trust UK). Cornwall Wildlife Trust has always been the flag bearer for protecting Cornwall’s wild places and long may it continue.

Tony’s ‘Lockdown Diary – 56 days’ limited edition print is on sale in the UK now for £345 (plus £14 post and packaging) and can be purchased at this page of Tony’s website. The print can be seen below and all profits on sales go to Cornwall Wildlife Trust, World Wildlife Fund and Rainforest Trust UK.

New research has revealed that seagrass beds in Looe Bay are up to ten times larger than those in Plymouth, Falmouth and Torbay, making…

Covid-19 restrictions have led to delays and postponements of many activities this year. However, thanks to the efforts of a small group…

See you at the Sea Festival: An online film festival created by young people, for young people