The unlikely stars of the garden?

Rowena Millar, Cornwall Wildlife Trust's (currently Non-)Roving Wildlife Reporter, continues to show us how to make the best of our gardens for wildlife. Following on from Rowena's earlier ‘When is a weed not a weed?’ blog, this week she highlights some of the uses of some native plants we normally rip out of our gardens. These are real wildlife magnets despite being unpopular for other reasons.

Ground elder is, if you look at it the usual way, a pervasive weed. It certainly takes advantage of any bare soil in the flowerbeds around our garden and gets in the way of the plants that are supposed to be there.

Last year, after I gave up on weeding it, we were rewarded with the most beautiful delicate panicles of white flowers greatly enhancing the beauty of the scene. What’s more, they attracted all sorts of solitary bees, hoverflies and honeybees. I’ve noticed that there is always a buzz of life around them, and so I am beginning to think of the ground elder as a wildlife garden treasure, despite its general unpopularity.

I learned that people can eat the young leaves of ground elder after buying a ‘wild food’ book. They can be added raw to salads or cooked like spinach. You can even eat the seeds either green or toasted and ground – a new way of thinking about the name ‘ground’ elder? The only danger is confusing it with poisonous members of the same family such as hemlock and hemlock water-dropwort. It is much more delicate than the cow parsley and hogweed which also spring up in our garden and then muscle in with their massive leaves and stems.

Stinging nettles are not just the caterpillar foodplant for the beautiful small tortoiseshell and peacock butterflies (look out for the characteristic silken tents of the emerging larvae and black, spiky looking caterpillars (with tiny white dots) of the peacock butterfly, and the tufty, black-with-yellow-stripes caterpillars of the small tortoiseshell). Did you know that nettles also provide food for the early nettle aphid, which in turn feeds ladybirds and blue tits just when they need a food source in spring? In fact, nettles support more than 40 different insects, including moths. These bring in a wide variety of hungry birds as well as insect eaters such as hedgehogs, frogs, toads, newts and shrews.

Another overlooked fact is that nettle seeds are a very useful food source for seed-eating birds.

Nettles have been eaten by people for centuries in a similar way to spinach, and the young leaves are a great free source of calcium, magnesium, iron, trace elements and vitamins. They have also been used to treat various aches and pains. My son folds up the nutritious leaves and then eats them without stinging his mouth – something I haven’t tried.

The temptation is to allow nettles to grow only in a forgotten shady corner where nobody wants to go. The downside is that a dark corner is also unattractive to sun-loving insects, so your nettles may not have quite such a rich diversity of inhabitants and visitors as it would in a sunnier position.

Ragwort is a very controversial native plant. It contains alkaloids that can be poisonous, causing a skin rash in some people, and potentially damaging the liver if eaten. Most alarmingly, it can kill domestic grazing animals, especially horses, and particularly if it’s been baled up and dried in hay. For this reason I spent many hours as a teenager pulling ragwort from a rather reedy north Cornish field that was the summer home of a semi-retired horse I had on ‘permanent loan’. Ragwort is not ideal to have upwind of grazing fields either. The seeds are windblown, and so ragwort can spread where it can potentially do harm.

Even as a teenager pulling ragwort, I was aware that the plant is used by a huge number of insects. I now know that, perhaps surprisingly, it also has a wide range of traditional medical uses. Its sap can apparently be cooling and astringent. I have read that it has been used for treating bruises, wounds, burns, stings, mouth ulcers, sciatica, rheumatism, gout and a whole host of other conditions. However, do not use any plant without carefully checking its credentials and usage first. 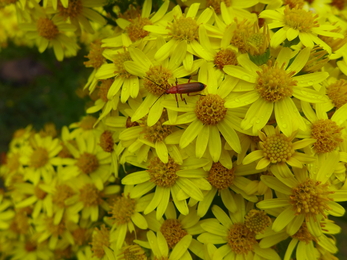 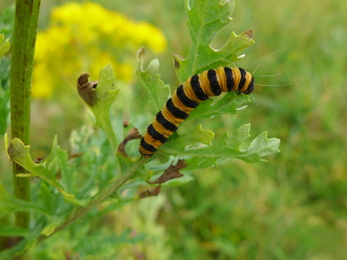 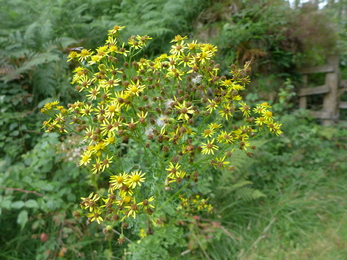 The striking red and black cinnabar moth uses ragwort as both a larval foodplant and as a source of nectar for adults. The caterpillars (unmistakable – ringed yellow and black) can decimate populations of common ragwort until nothing but ragged stems remain. The other main consumer of ragwort is the less appealingly named flea beetle (Longitarsus jacobaeae). Common ragwort supports a large number of other insects too.

Rather than cause harm by completely removing a native species, therefore, the Defra Code of Practice suggests allowing it to grow where it will not harm grazing animals:

"common ragwort and other ragwort species are native to the British Isles and are therefore an inherent part of our flora and fauna, along with invertebrate and other wildlife they support. The Code does not propose the eradication of common ragwort but promotes a strategic approach to control the spread of common ragwort where it poses a threat to the health and welfare of grazing animals and the production of feed or forage."

If you have ragwort in your garden and you can cut it down before seeds blow onto grazing pasture, or if you do not live next to fields, you might consider keeping these plants to benefit wildlife. It’s years since I’ve seen cinnabar moth caterpillars, except on a trip to Penhale on the north Cornish coast with Cornwall Wildlife Trust. It would be tragic to lose those stunning moths. The claim that ragwort is a ‘notifiable weed’ is actually a myth, and so you do not have to report it.

These are my own views on three ‘weeds’, and I definitely do weed them if and when they become too rampant! It’s just useful to remember to see things from wildlife’s point of view too.