It's a June jungle out there!

Rowena Millar, Cornwall Wildlife Trust's (currently Non-)Roving Wildlife Reporter, continues to show us how to make the best of our gardens for wildlife. This week Rowena explores her 'June Jungle' and identifies what wildlife you should keep your eyes peeled for.

June is a great time to abandon any lingering thoughts that gardens should be neat and tidy places. Embrace the joyous wildness of it all, and as well as starting to pick any fruit and veg you have grown, spend June’s 30 Days Wild discovering nature in your garden. The warm weather, the flowers and the dense, rampant vegetation (it’s certainly rampant around here in East Cornwall, anyway) bring out an abundance of new birds, new minibeasts, and the occasional larger animal too.

This week I have been doing some wildlife investigating, not only by day, but also in the dark with the help of my ‘hedgehog cam’. By looking closely whenever I notice a buzz, a wiggle or a whirr, I have found some creatures I certainly didn’t know were there. Exploring the detail of life in a garden is a great thing to do if you are avoiding crowding into workplaces, classrooms, shops or potentially busy tourist destinations at the moment. Better still, if you are wildlife watching very close to home, either in your own garden or along your nearest undisturbed verge or hedge, you can go indoors again if there’s a downpour on its way.

During the day, we have spotted fledgling blue tits, great tits and robins being fed with their parents in the garden. As large as their mum or dad, these little bundles of joy have been fluffing up their feathers and opening their beaks wide to make themselves look like babies in need, rather than sub-adult birds ready to start fending for themselves. In the evening, listen for cawing and look up to see groups of corvids flying overhead towards their roosts. In the early morning, listen for birdsong. One morning we had a bit of a surprise when a young jackdaw fledged down the chimney instead of into the garden. What fledglings have you noticed?

Until the sudden wet weather arrived, it had been a fantastic year for bees and hoverflies in our garden. They included a variety of bumblebee species on fruit flowers in particular, as well as many shapes, colours and sizes of solitary bee that especially loved the flowering ground elder, and what seemed like a whole hive of honeybees that joined bumblebees visiting countless red flowers for a few days at the height of the crinodendron’s (Chilean lantern tree) flowering period, proving that some non-native trees and shrubs are good at attracting insects too. They created quite a hum. Gratifyingly, our cavity-nesting solitary bees, such as red mason bees, have been stopping up the tubes in the bee nests we put up in our sunniest corner, which means that our fruit bushes have been pollinated and we should have a new generation of interesting and attractive bees to watch later. 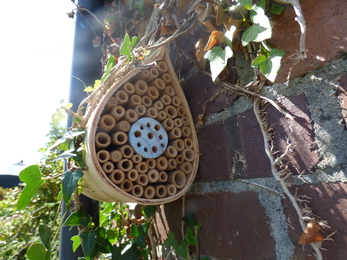 Bee nest with tubes have been stopped up by bees 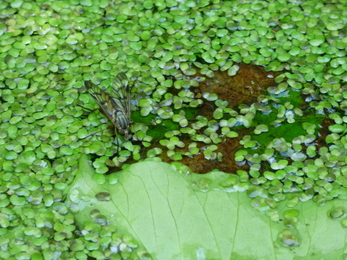 The hot weather brought many different flies to the garden 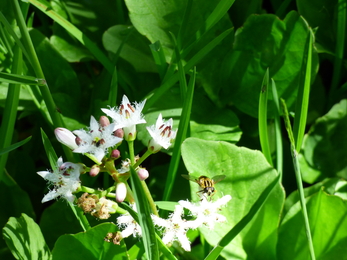 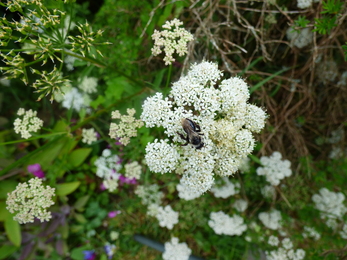 This morning, walking along the narrow path down to our pond, with a hedge on one side and fruit bushes on the other, I met what looked at first like a swarm of mosquitos dancing around in the air. I took a closer look and saw that each apparent mosquito was waving what looked like at least one extremely long whip high above its body. That was strange. Could they be some sort of caddis-flies with extra-long antennae hatched from the pond? One or two landed, and I was surprised to see that they looked like moths. It was indeed a cloud of yellow-barred longhorn moths. Typically found in wooded lanes and along hedges, these little day-flying moths are a wonderful shiny gold, but their crowning glory is the extraordinarily long antennae of the males. Apparently the males do dance in groups together, as if they are midges or mosquitos. The larvae eat leaf litter, so there’s been plenty for them to eat in my garden jungle.

You can learn about the health of your soil by digging up a spadeful of earth and looking for worms. There are around 16 varieties to find in British gardens. Their presence is not only a sign that your soil is healthy – they are actually responsible for soil health, by processing decaying matter such as leaves and turning them into soil, like tubular soil factories. They also improving soil structure with their tunnels, providing vital aeration. Here is a handy earthworm ID key.

Extremely solid, wet or acidic soils may have fewer worms, which means less food for birds and hedgehogs, and so it’s a good idea to add mulch and leaf litter to the ground in gardens (although poor, stony soil can be a basis for starting a wildflower meadow and wet, acidic soil can be the basis for a lovely bog garden).

By far the largest density of worms in my garden occurs in the compost heaps, where the distinctively pink-banded ‘tiger’ or ‘brandling’ worms (Eisenia foetida) eat decaying organic matter. These compost specialists aren’t found so much in normal garden soil, but I have noticed them under bags of compost or old planks of wood. Finding them in abundance and knowing they are at work, converting veg waste and garden trimmings into rich, crumbly compost, warms my heart.

Last night, in the pouring rain, I found a large frog trying to find its way out of the fruit cage. Fortunately, such a large amphibian could easily be shown to the doorway, where it hopped out without a fuss. Newts and toads also wander around the garden, the newts sometimes finding their way into the greenhouse. I once picked up a dark-coloured toad on the veg patch, mistaking it for a rotten potato!

There was a lizard on a sunny bank in the local woods before the rain set in, but so far, no reptiles have been seen in our garden this year. There are warmer places nearby and further from human civilization, perhaps, but I live in hope that we’ll have some hot days later in the summer to tempt them in.

However, we do have mammals. A grey squirrel visited one day (I wish it could be a red squirrel) and the night-time camera trap, now set to video mode for some live action, has recorded hedgehogs scurrying up and down along the hedge every night and drinking from their water bowl. Ours seem to have particularly furry underskirts beneath their prickles. A low-set camera is revealing the sex of the hedgehogs if they life a leg for a quick scratch. There was also a wood mouse, with gleaming bead-like eyes, beetling down the path at great speed before leaping into the bottom of the hedge with the energy and bounce of a grasshopper.

Some people may complain about finding a mole in their veg patch but I would like to see one. Sadly ours seem to be sticking to nearby fields and grassier parts of the hill across the valley.

If you are gnashing your teeth in envy at this point because your garden is tiny or non-existent, non-jungly, in a built-up environment, and you don’t have permission to change it, don’t despair. In Cornwall (and, to be honest, in a great many other parts of the world) we are spoilt for choice when it comes to finding a June jungle nearby. Wait for the sun to come out or choose a warm evening, find your wild place such as an untamed hedge or a piece of scrubland, and take a while to look long and deep and listen intently.

You can feel stems and tree bark –hairy or ribbed, rough or smooth – and find creatures camouflaged on and in the trees and tall grass (but watch out for ticks at this time of year). You can even taste the jungle if you know it’s safe to do so (you can suckle from a honeysuckle flower or nibble on the petal of a dog rose, an oxeye daisy or a violet if you feel so inclined).

Wherever you are, I can pretty much guarantee that if you immerse yourself in nature you will discover something new and unexpected this June, and that it is worth investigating, admiring and protecting.