Canes, sticks and edible jewels in the fruit and wildlife garden

Rowena Millar, Cornwall Wildlife Trust's (currently Non-Roving) Wildlife Reporter, continues to show us how to make the best of our gardens for wildlife. This week, Rowena highlights how we can repurpose old raspberry canes for the benefit of nature and shares the late-summer, sweet surprise waiting for her in her garden.

As the sun sets on summer and our garden plants swap frenetic growth for seed production and a winter rest, I’ve been out in the fruit cage catching up on cutting and tying in raspberry canes. The old ones can be used to help other plants and wildlife around the garden.

As usual, I’ve left removing the old raspberry canes much later than intended. To my surprise, there were still a few soft, chubby late raspberries on the younger, more robust plants, despite earlier torrential downpours with strong winds.

I don’t think they were an autumn-fruiting variety. Instead, it was probably more to do with a late burst of glorious hot sunshine following the colder weather. There were some small but tasty raspberries in the local woods too, their floppy thornless stems holding their own amongst tougher, more vigorous brambles. Maybe others hadn’t noticed these humble little fruit amongst the tart unripe red blackberries and their juicy black ripe companions.

Raspberries in the fruit cage, Image by Rowena Millar

If you don’t cut down your old raspberry canes after they’ve fruited, you end up with old growth getting in the way of next year’s more productive stems. As you are pruning near the foot of each old stem, you can let your mind wander, or marvel at the different arthropods like spiders and bugs living in, around and under your fruit bushes. If you grow late-flowering plants there will still be plenty of bees, butterflies and hoverflies about too.

Expert gardeners will tell you to cut out some of the young canes too, to thin them and ensure vigour in the remainder for next year. I always seem to break or tread on a few by mistake, but I am rather generous to those healthy new plants that insist on growing outside the fruit cage and around the rest of the garden. These are to share with the blackbirds, but we end up collecting many of them, as the blackbirds have other berries to choose from.

Tie the new canes gently but firmly to strong sticks or posts pushed deep into the ground (I find tall bamboo works well) using either garden string or reusable flexible ties. This helps the raspberry plants survive the strong winds of autumn and winter. I support canes along the outside edges of the fruit cage, or growing along the hedge, with long horizontal pieces of string, to stop them leaning across the path. 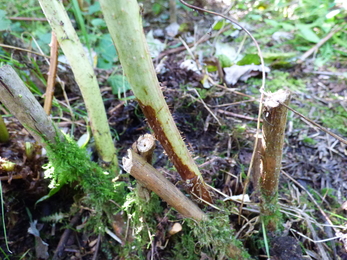 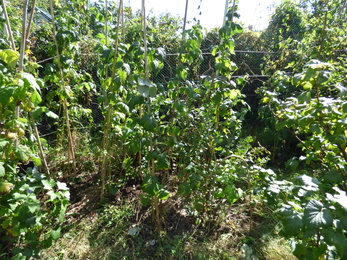 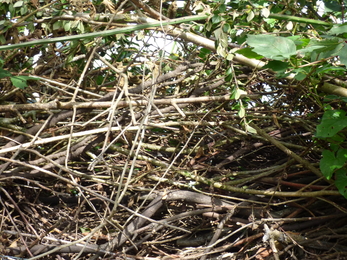 What to do with the old raspberry canes

Yesterday I noticed robins fluttering around inside a boundary I created using a mix of living trees and shrubs (vertical) and cut branches and canes (horizontal). The garden border was planted some years ago with a row of shrubs and trees including Amelanchier, Guelder Rose, Dog Rose, Rowan, Holly, Tommy Knight apples and Cornish Aromatic apples, Buddleia, and our old slow-growing Christmas tree. As these have grown up, I’ve been inserting cut branches horizontally between them to fill in any gaps.

Growing a lot of trees, fruit bushes and shrubs in a limited space does involve a certain amount of cutting and trimming. Laying the trimmed branches horizontally, weaving them in and out a little between vertical living trunks and stems, tidies up the inevitable large pile of cut branches and sticks that’s in the way, while creating rather a good nesting and sheltering habitat for birds such as robins, dunnocks and wrens. If you do the same, remember to leave a little hole somewhere at the bottom for hedgehogs to get through.

Remember to leave a little hole somewhere at the bottom for hedgehogs to get through... old raspberry canes have become part of the hedgehogs’ winter home and shelter.

Some old raspberry canes have become part of the hedgehogs’ winter home and shelter. This resembles a bonfire at the bottom of the garden by the Cornish hedge, under oak and hazel, facing approximately west. It’s a permanent feature, slowly rotting down and being added to. This may also be useful to overwintering small mammals, reptiles, amphibians and invertebrates. Here are some other ideas:

While tying in next year’s raspberry plants on August Bank Holiday Monday, I discovered some a second crop of other berries. My whitecurrant bush, purchased from a local organic garden supplier years ago, must be one of the best-value fruit bushes ever. Its new strings of translucent berries seemed to absorb the sunshine and glowed like wonderful pearl necklaces and earrings. These were very sweet jewels, so I ate some of them straight off the bush. The others will be destalked and popped into the freezer.

The redcurrant bush was also fruiting again, its glowing berries hidden among fresh green fern leaves and old grass that had grown up underneath. I’ve left a few on the ground for hungry hedgehogs, which will eat fruit as well as invertebrates. At this time of year, the door to the fruit cage is left open for them, to help them fatten up.

I’ve also been discovering fungi – without which our familiar natural world would almost certainly not exist – and preparing the pond for winter. These are subjects for future blogs, along with some more favourite creatures. So do keep reading, and thank you for your interest.

Fungi in the garden – some revelations

Brambles - are they garden plants?

Collect and grow your own seeds for wildlife