Bats in our gardens

A very exciting thing takes place in our garden every now and again: a Greater Horseshoe Bat flies through. It’s awe inspiring to see those wide wings swooping past our upstairs windows or to hear the otherworldly sounds on my Bat detector.

Here in Cornwall (and Devon) we are privileged to live in a UK stronghold for this rare, potentially long-lived bat. In fact, we have 12 resident breeding bat species out of 17 or so in the UK, each with their individual behaviours and habitat requirements. The Mammals of Cornwall and The Isles of Scilly tells us that until recently, all bats were just seen as ‘bats’, and therefore there is only one word for them in the Cornish language – ‘askel grohen’ (leather wing).

The plight of bats

Just as we are getting to know and love our bats, we are becoming aware of a dramatic fall in their numbers across the UK and Europe. As usual, it’s our fault, because of rapid changes brought about by the way we live in the modern world. Human behaviour is causing losses of habitat, unintentional disturbance and huge declines in insect numbers due to pesticides and land-use changes before we even start to consider climate change. Britain’s old crumbling buildings and dead trees have too often been cleared away, insecticides have done their deadly damage, and modern development has expanded.

Fortunately, Cornwall (including the Tamar Valley, my local area) still retains many old mine buildings, traditional hedges, reasonably traditionally managed pastures and moorland, heathland and riverside deciduous woodland. All these habitats can be found in Cornwall Wildlife Trust nature reserves. As landscape custodians, I feel it is humanity’s duty to look after our remaining bats while we still can. We are required, by law, to strictly protect them and leave them undisturbed . We can also do our bit to actively encourage them.

As land-dwellers, we love watching aerobatic displays, and our local bats put on a dramatic performance during the long summer evenings. The little balls of fur dashing, swooping and flitting through the shadows are perhaps the night-time equivalent of swallows and swifts.

Another great thing about bats is that, unlike other wild mammals, they don’t run away and hide when humans are present. We are just another object to be flown around in the dark using echolocation. The accuracy of their navigational superpowers makes it unlikely that we will be crashed into, yet we get a special thrill as bats pass by.

If you’re lucky, you may be able to see bats flying over water, in lanes or woodland clearings, or emerging from a nook or chink in a wall or roof at dusk. Look for dusty droppings or some discarded insect wings in places where they rest, emerge and feed.

The most reliable way to discover bats is to build, buy or borrow a bat detector. These clever little boxes of electronics lower the pitch of bat calls so that they can be heard by the human ear (different species make different sounds)

Listen to the sound of bats here

I have a basic heterodyne detector. More sophisticated gadgets link up to your computer to offer extra information. A guide to bat detectors.

What not to do

We must all avoid disturbing bats in any way, bats.org have a great guide here

Even opportunist bat species that appear to tolerate lit streets, roads, rivers and buildings are adversely impacted by artificial lighting, so it is best to avoid lighting our gardens (and our world in general) at night. Light causes disturbance, affects migration patterns and can reduce supplies of insects, which die either from injury, starvation or predation after being attracted to lights.

How to encourage bats into your garden and the wider countryside

If you read my moth blog, much of the advice about how to encourage moths will encourage bats, too. ERCCIS also have great advice

Basically, plant night-scented flowers and create or maintain a pond or wet area to help our declining insect populations (and wildlife in general). Don’t be too tidy throughout the garden; you can help wildlife by leaving areas of long grass and native plants for both caterpillar food and moth shelter.

Grow native trees and shrubs to feed and shelter insects and provide shelter for bats, too. Compost heaps and natural mulches feed your plants, protect/enhance your soil and give rise to the sorts of insects eaten by bats. Tiny species like Pipistrelles will feast on midges, Daubenton’s bats enjoy catching larger pond and river flies too, and a Noctule is large enough to crunch on a big, fat, juicy cockchafer.

Species such as Greater and Lesser Horseshoe Bats rely upon old buildings as roost sites, including derelict farm buildings and abandoned mine sites. As gardens become smaller and more sterile (please don’t install plastic grass) and houses more airtight and secure, I hope we can recognise derelict properties as picturesque wildlife havens rather than eyesores to demolish, or brownfield sites to exploit and develop. If you can, make your own buildings bat friendly by leaving cracks, crevices or gaps leading into enclosed spaces. If you have the means, perhaps even create a stone folly in a quiet corner and wait to see what wildlife comes to visit … 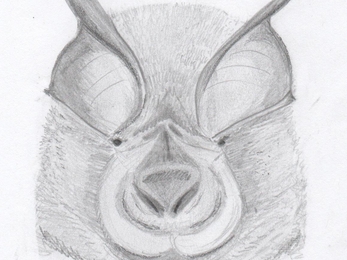 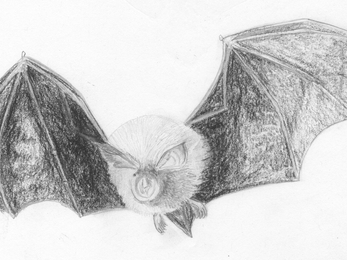 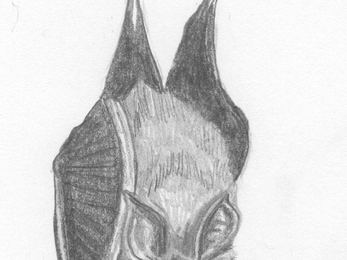 The Greater Horseshoe Bats of East Cornwall are able to seek out abandoned mines, including engine houses and adits in hillsides. Such buildings make good summer maternity roosts if they are warm, spacious and undisturbed. Yet according to Cornwall Mammal Group’s book, only four greater horseshoe bat breeding sites are known in Cornwall!

Lesser Horseshoe Bats, Brown  Long-eared Bats, Whiskered Bats and Natterer’s Bats also roost in buildings. Daubenton’s Bats, which hunt over water, roost under bridges and in trees and buildings as well, and our smallest and commonest bats, the Pipistrelles, may roost in trees or buildings. Cornwall’s largest bat, the Noctule, requires holes in old trees – one of many reasons to protect our ancient woodland heritage.

Cornish hedges are particularly useful to bats. They use these ancient landmarks for navigational purposes, and as a source of food that connects scattered wildlife habitats. A well-managed Cornish hedge, sympathetically maintained so that it is covered in flowers and diverse vegetation, creates continuity in the countryside. (Maybe there is a ditch along one side too, or a pond in a soggy field corner, where gnats can breed.) If you incorporate linear features into your garden, especially hedges that provide food, you will help local bats.

You can also put up bat boxes, which help bats cope with a shortage of roosting sites …. Cornwall Wildlife Trust uses bat boxes to increase the bat-friendliness of nature reserves. You cannot guarantee to fill them, and bat presence is seasonal. Some boxes can contain tightly packed clusters of occupants, while others stay empty.

Cornwall Wildlife Trust and ERCCIS have also published easy-to-follow advice on building your own bat box.

Get more involved with bat conservation

If you feel inspired to discover or help bats, you can join Cornwall Bat Group, one of Cornwall Wildlife Trust’s affiliated groups

The Devon Greater Horseshoe Bat Project extends into the Cornish side of the Tamar Valley:

Cornwall is fortunate to have bat rescuers ready to rehabilitate injured bats.  You can go here for useful contacts if you find a bat in distress.

ERCCIS have lots of general information about Bats.

For any enquiries about bats call the National Bat Helpline, run by the Bat Conservation Trust on 0345 1300 228.

Canes, sticks and edible jewels in the fruit and wildlife garden

Brambles - are they garden plants?

Collect and grow your own seeds for wildlife