https://twitter.com/NaturalWord
Professional wildlife and environmental writer & editor, musician & wildlife gardener.
November 2019 has been Kilminorth-themed for me, with a guided tour of the woods on 8th and a practical activity (forgoing Cornwall Wildlife Trust’s AGM), to benefit local dormice on 16th.

Remarkably, despite what has often felt like a cold, dark, very wet month, the weather was glorious and sunny in magical Kilminorth Woods on both days.

Kilminorth Woods Local Nature Reserve, across the estuary from – and mirrored by – the Woodland Trust-owned Trenant Woods, is owned by Cornwall Council and open to the public. It is managed principally by countryside ranger Jenny Heskett of Cormac and her teams (see the latter part of this article). The 100 acres (approximately 45 hectares) line the estuary beginning at Looe’s Millpool car park, and are classified as ‘western oak woodland’. They are actually part of Polperro parish, and included in the Polperro Neighbourhod Plan, although many Looe residents may not realise this. Although the most ancient trees have gone, there has been woodland here since at least 1600 AD and there’s a mysterious ancient monument too …

Thank you, Friends of Kilminorth Woods, for a truly lovely day.

Visit www.friendsofkilminorthwoods.co.uk to find out more.

A guided walk around Kilminorth Woods

Our guided walk, led by Christine Spooner of the Friends of Kilminorth Woods http://friendsofkilminorthwoods.co.uk/, ably assisted by her husband Derek, author of Wild Looe, (available in all good bookshops including https://www.nhbs.com/wild-looe-book), and another Friend, Rogan Jones, took place on a glorious sunny day that turned the hillside opposite gold and filled the estuary with spectacular reflections.

Early in her introduction to the woods, Christine told us that recent Japanese research relating to ‘forest bathing’ had found deciduous woodland by the sea to be particularly beneficial for people’s well-being. Kilminorth Woods are sessile oak-based mixed deciduous woodland bathed in the sea air from the Atlantic ocean at picturesque Looe. I’m sure we all breathed a little more deeply to take in the fresh, healthy atmosphere.

The tide was out on our arrival, and Derek told us about the bird interest along the estuary: there is a small heronry across the river (we were able to see Grey Herons up in a tree) and there are also Little Egrets – about 12 pairs of each in summer.

Derek reported a lot of Kingfisher activity, and low tide is a good time to see them (keep reading for my photos, taken at a distance). They come to the estuary at this time of year after breeding further upstream, and Derek had seen them every day over the past three weeks.

The Black-headed Gull has a much whiter head in winter. This one was seen from Millpool car park. (Rowena Millar)

Resident birds in the woods include Jay, woodpeckers and Nuthatch, with Blue Tits (described by Derek as principal users of the nestboxes) nesting in summer.

A small number of Great Tits and Marsh Tits are also found in the boxes. The Marsh Tit, now on the Red List of the UK’s Joint Nature Conservation Committee and in serious decline over recent years, didn’t use the boxes this year, but is still present in the woods in small numbers. The Friends have put up some low, small nest boxes especially for Marsh Tits, which also use dormouse boxes.

Derek pointed out a natural Coal Tit nest that had been used this year. Brown Long-eared Bats had also preferred dormouse boxes to bat boxes.

But now, the ancient monument …

We began our walk at the ‘Giant’s Hedge’. Our quite large assemblage of wildlife enthusiasts consisted mostly of Launceston Area Parish Wildlife Group (LAPWG) https://www.launcestonparishwildlife.org.uk/ , on a neighbourly visit south at the invitation of friends from our fellow Wildlife Group. For a list of groups, see https://www.cornwallwildlifetrust.org.uk/cornwall-wildlife-groups

Setting off towards the Giant’s Hedge. (Rowena Millar)

Christine told us that the Friends of Kilminorth Woods were set up in 2006. They found a lot of rhododendron (Rhododendron ponticum) spreading into the woods, and had a remarkably successful campaign to get rid of it. These rhododendrons not only cast shade and discourage other species from growing around them, but also, their pollen is toxic to honeybees and the honey is reportedly toxic. I didn’t know that! Interestingly, she said that the rhododendrons didn’t tend to flower in the shade of Kilminorth Wood, so I guess no local poisonings have been reported.

We began walking along Giant’s Hedge path. There is much speculation about the hedge. It is a steep embankment that once stretched from Looe to Lerryn. It probably dates back to 600 AD and may have been the boundary of a Cornish kingdom. There may have once been two embankments rather than one, and it may have stretched eight miles in total and reached to the sea. Was it defensive? No one knows for sure, and Christine would love a geophysical survey to take place.

Start of our walk along the Giant’s Hedge. (Rowena Millar)

The path along the Giant’s Hedge. (Rowena Millar)

Walking up the steep path, we heard a nuthatch and came across bird boxes and dormouse boxes, but no dormice have been found this year. Our dormouse expert told us about the two that had been found previously – one was in a bird box.

There are over 50 bird boxes and over 70 dormouse boxes in Kilminorth Woods, although some have disintegrated. At first checking bird boxes just at the beginning and end of each year, Derek is now checking them once a week from April through to June, for the BTO (British Trust for Ornithology). Keep reading to the second half of this blog to see how the local Cormac Ranger, Friends and other volunteers are taking action to help dormouse populations recover in these woods through renewed coppicing activity.

As the sun shone through multi-coloured autumn leaves, LAPWG member Tony Atkinson observed that we were surrounded by even-aged, secondary woodland. We learned that veteran trees were slowly being mapped and measured, particularly the sweet chestnuts, which mature quickly.

Only a few of the Friends are involved with practical woodland management, but these few are helping to create small glades, giving older trees space to grow. Although Kilminorth is classed as ancient woodland, in the past the woodland would have been cleared in patches. There are still stumps remaining from some very old-looking trees, particularly along the degraded Giant’s Hedge.

As we made our way along the leafy track, I spotted something brilliant turquoise on the ground. Usually I would expect something this bright to be plastic, or stray jay or kingfisher feathers, but apparently it’s the mycelium of a brightly coloured fungus Chlorosplenium aeruginosum.

A path above the estuary

We also came across a lovely view down to the former boatyard below us, now cleared of pylons. This view is kept relatively open by woodland management, and is ever changing. While we were there, Tony related how boatbuilders used to select bent trees with ‘knees’ from the local woods. Woodland was used by the other local people too for whatever they needed – I guess this included firewood, fence materials, tool handles and peasticks.

Views are being opened up through the trees, looking down to the estuary below. (Rowena Millar)

We reached a small stream that’s marked on the OS map. Sadly, this part of the woods has been a focus for vandalism, with people lighting fires inside trees. It’s also a litter hotspot, but the Friends hope that people are learning to value the woods as they gather in this more open area where beech trees have suppressed the undergrowth.

Local lads used to meet at this tree (below), known as the ‘White Lady’ or ‘Naked Lady’. She is slowly disintegrating, but she has plenty of ‘babies’. The bare stump is covered in a pale lichen.

The banks along the path are an ecological treasure full of mosses, lichens and ferns, providing homes for voles, robins, wrens, and ferns such as the Broad Buckler Fern. We also found a Coal Tit nest right at the bottom of a tree.

We passed an area where coppicing has been taking place to open up the woodland. It may disturb dormice initially, but in the long term they do return to suitable habitat, weather permitting. Tree thinning is encouraging spring flowers and butterflies, too.

The ‘Raven Tree’ is a big conifer, on its way out and with a big Wood Cauliflower fungus. We learned how dying trees make interesting creaking noises … 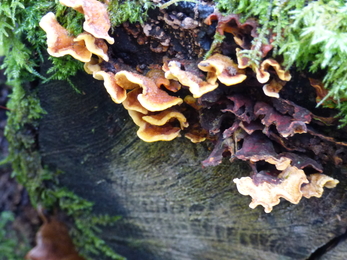 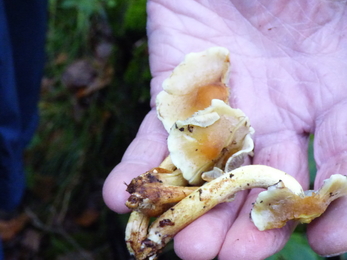 A handful of fungi. (Rowena Millar) 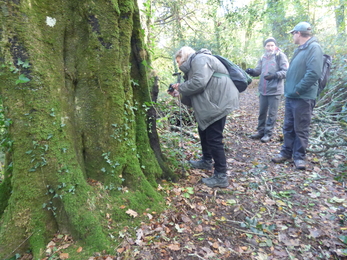 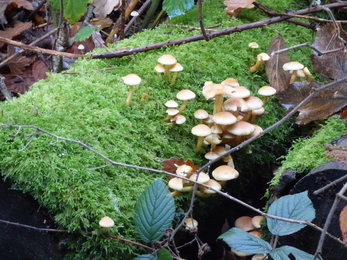 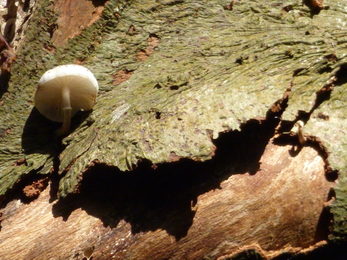 There was a steep walk down from our path to the furthest point of our journey, where we stopped for a while.

On the way down. (Rowena Millar)

A steep path down to water level. (Rowena Millar)

Watergate, once boasting tea rooms, is close to the tidal limit, and there are lime kilns a few hundred metres further upriver. The rock to be burned in the kilns was was brought from near Plymouth by barge. The resulting lime was used on the fields by local farmers, to improve the land.

Jen carefully steps down to the muddy waterside. (Rowena Millar)

Emerging from the woods. (Rowena Millar)

We stopped for a gaze at the river and some edible birthday treats from Jen (surely we should be giving her treats on her birthday, not the other way round) before walking back along the lower path by the estuary.

Our return journey was along the path along the lower edge of Kilminorth Woods. Here, at the foot of the woods, the area has its own piece of saltmarsh.

Derek Spooner leads the way back, with saltmarsh below left. (Rowena Millar)

Reflections on the water. (Rowena Millar)

We were treated to some spectacular views of the woods and river on our return walk. 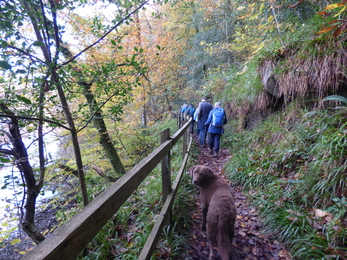 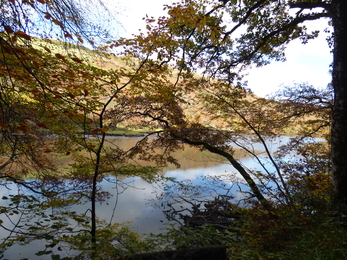 The glory of autumn. (Rowena Millar) 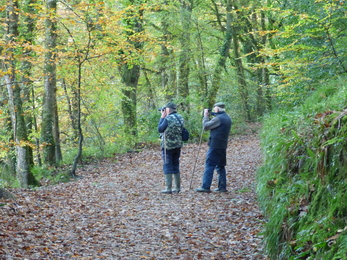 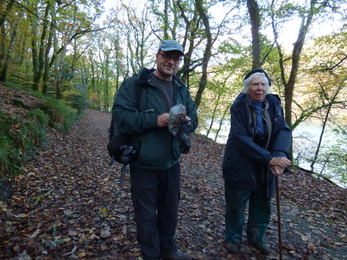 Two naturalists to help us identify species: Rogan Jones of the Friends and Mary Atkinson of LAPWG. (Rowena Millar)

These banks were covered with ferns, too, which could be identified by Mary Atkinson if we weren’t sure what they were. (The intrepid Tony Atkinson clambered up to some high rocks to check out a past record of the Tunbridge Filmy Fern, but it was too dry and sunny up there and the fern was not present.)

Back on the subject of birds, Derek reported that there were eider flocks in the bay. There had been a previous flock of seven, but then a larger, different flock of 14, including six males. We were in store for a different bird-related treat as we headed to the end of our walk: a kingfisher hunting on the far shore, perching on dead wood and diving into the calm waters. Apologies for the quality of my long-distance photos. I always forget to bring a tripod to steady the camera!

My first sight of a Common Kingfisher (Alcedo atthis), the only British species. (Rowena Millar)

A third perch, still far across the estuary. (Rowena Millar) 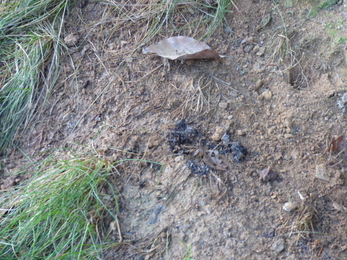 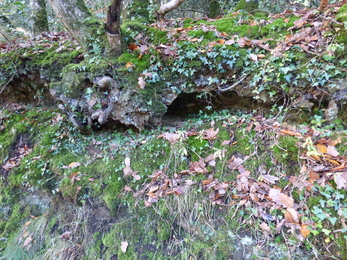 Good cover for an otter running along by the river. (Rowena Millar) 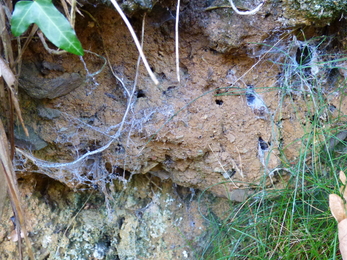 Bee and spider homes in the earth banks on the shore. (Rowena Millar) 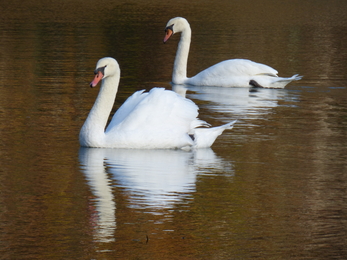 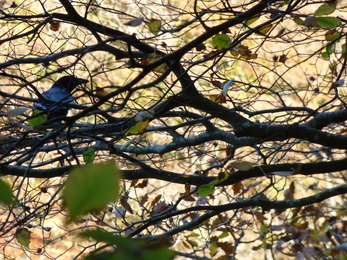 A Carrion Crow amongst the branches. (Rowena Millar) 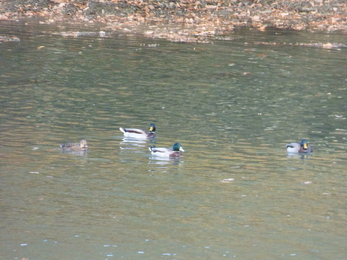 Mallards swam in groups on the water, sometimes taking to the air above. (Rowena Millar) 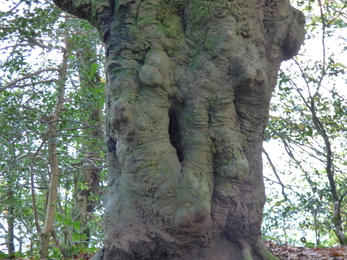 An iconic tree near the way into Kilminorth Woods from the Millpool car park. (Rowena Millar) 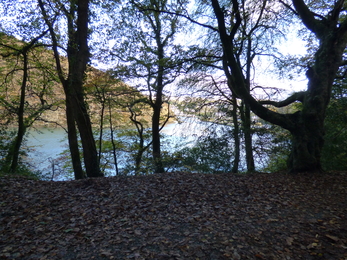 View across to Trenant (Rowena Millar) 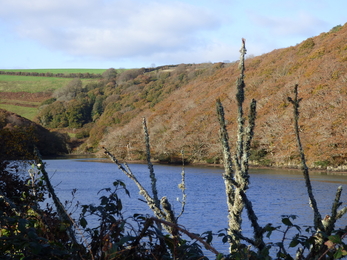 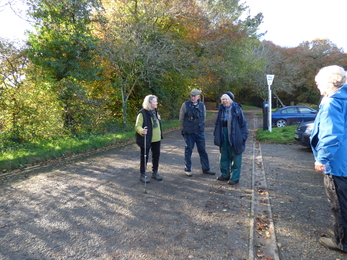 (Left to right) Jen, Tony, Mary and Christine say their goodbyes.
[Footnote: Jen tells me that she went on to see a Red-breasted Merganser (Mergus serrator) diving for fish while she, Pete and Tessa enjoyed a packed lunch by the river.] (Rowena Millar) 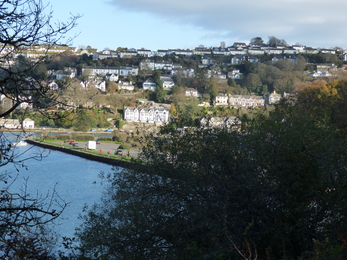 Thank you, Friends of Kilminorth Woods, for a truly lovely day.

Visit www.friendsofkilminorthwoods.co.uk to find out more.